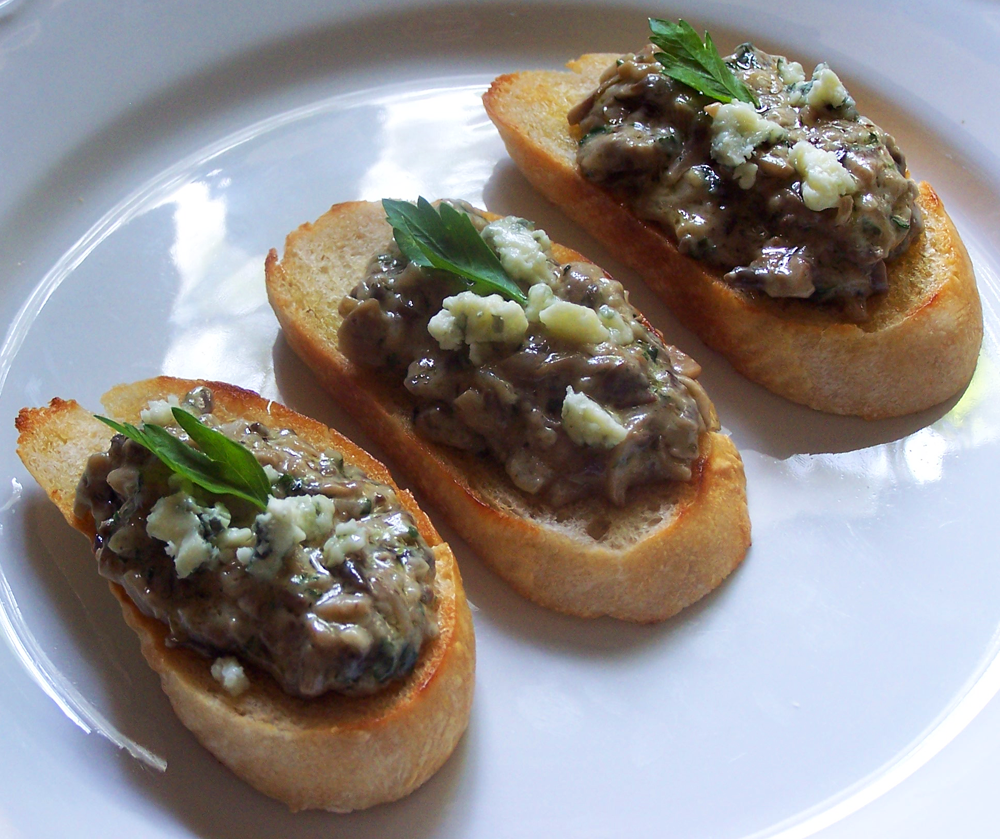 If you’re a fan of mushrooms and gorgonzola, this take on mushroom duxelle is creamy mushroom goodness.

Start by sautÃ©ing your minced shallots (or onions) and garlic in olive oil, and season with salt and pepper. Once the shallots and garlic have begun to caramelize, add your chopped mushrooms.

You can use any mushrooms that you like for this, and basic champignon mushrooms will work great.

The mushrooms will release a fair amount of water at this point, and the goal is to continue cooking them until they begin to caramelize. You’ll want to get a nice color on them, and a good trick is to tilt your pan and move your mushrooms to the top of the pan, allowing the liquid that’s being released to drain to the bottom. Isolate the bottom of the pan with the liquid over the flame or burner, and allow the liquid to reduce to almost nothing. This really concentrates the mushroom flavor.

Once you’re mushrooms are well caramelized (still on high heat), deglaze your pan with white wine (1/2 to 3/4 of a cup) and reduce it by about half.

Once reduced, lower the heat and add your butter (1-2 tablespoons), and continue mixing until it’s fully incorporated. Next, add your cream or milk. A little of the cream will go a long way, so start by adding a tablespoon or so at a time, until the mixture becomes creamy. Then add your gorgonzola and parsley, and continue to cook until it reduces and begins to thicken.

The goal is to have a mix that is thick enough to sit up on a crust of bread. So, with that in mind, as the mixture begins to thicken to the right consistency, gradually dust it with a bit of flour (if needed), just to tighten it up. You won’t need a lot of flour. Just dust a bit over the top and mix it well (you won’t have issues with clumping), and it will come together.

When it’s almost the proper thickness, remove it from the heat and add a bit of grated parmesan cheese, which will also help bring it together.

Finish by mixing in the juice of half a lemon, and salt and pepper to taste.

When it’s reached the right consistency, spread the duxelle over slices of baguette, or any bread that you like, and garnish with a bit of parsley.

Close
Subscribe to EpicuresTable.com to receive
recipes and updates by email