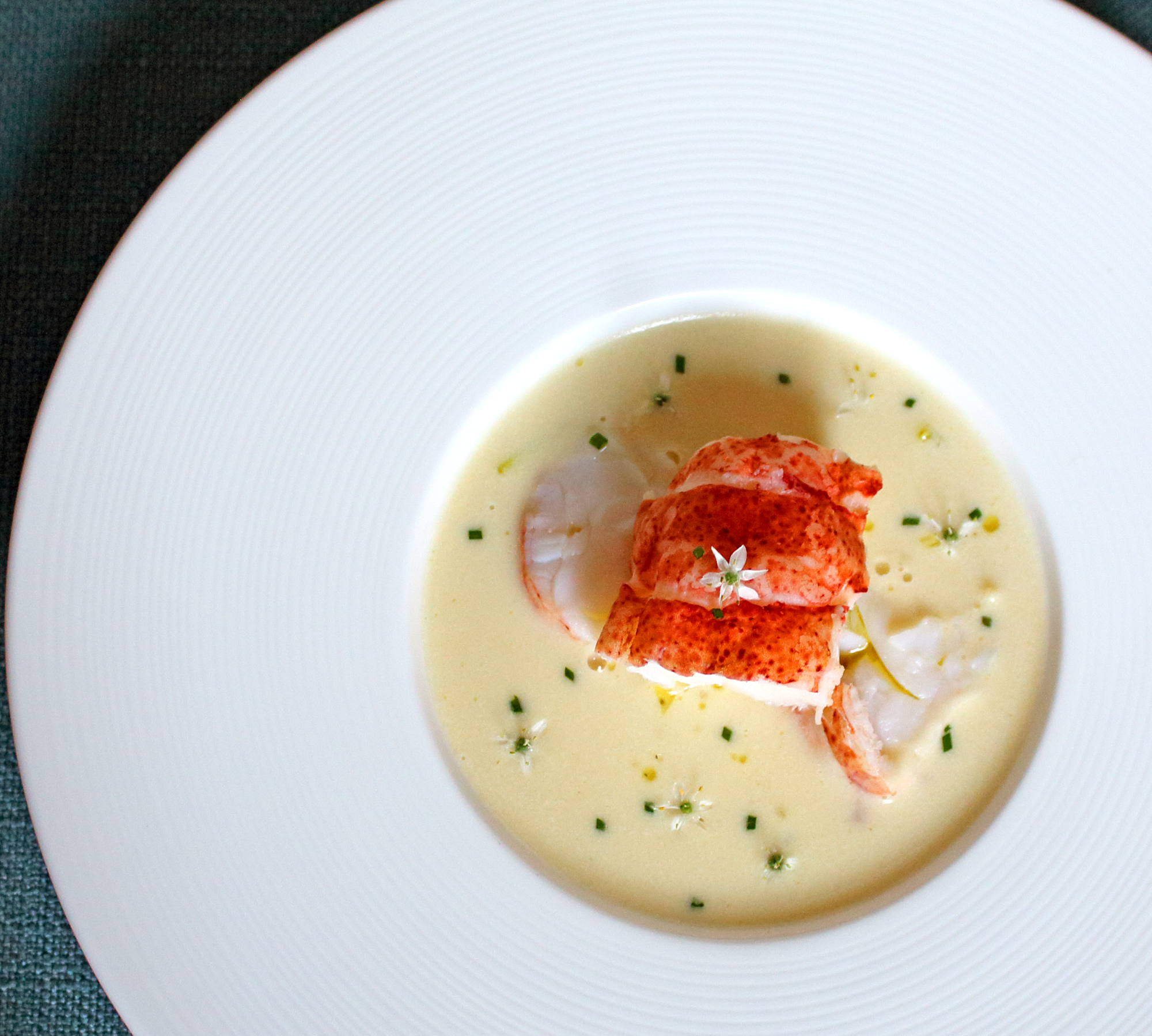 This is a spin on the more traditional potato vichyssoise, and the cauliflower makes an excellent soup that goes great with the lobster. This dish takes a bit of time, but it’s delicious and well worth the effort.

It’s worth taking the time to make your own chicken stock for this dish. Start by brining a whole chicken, 2 carrots, 1 celery rib, 1 onion, parsley (stems and all), the green part of 1 leek, pepper corns, 1-2 bay leaves, and a bit of salt slowly to a boil.

Once the stock begins to boil, reduce the heat and let it simmer for 2-3 hours.

Start by sautÃ©ing half of a diced onion, 2 cloves of garlic, and 1 leek (the white part and some of the light green part) in olive oil. Cook these just until they start to caramelize, then transfer everything to a sauce pot. Also, reserve a bit of the leek to julienne later.

Next, roughly chop 1 head of cauliflower, then sautÃ© it until it begins to caramelize, and transfer it to your sauce pot. Season everything with salt and pepper, then add a bit of white wine, ladle in a bit of chicken broth, and bring it to a boil. Add just enough liquid to keep the vegetables from burning or browning, but don’t add too much at once (otherwise the blended soup will be too thin). Ladle in chicken broth throughout the cooking as needed, until the cauliflower is fully cooked.

When the vegetables are cooked, transfer everything to a food processor or blender, and blend until completely smooth. Next, strain the mixture back into your sauce pot (you may need to give it a rinse and a wipe to make sure there aren’t any solids left in the pot).

Bring the mixture back up to temperature, then add more white wine (about 1 cup), several table spoons of butter, and 1/2 to 3/4 cup of cream. Also, peel and add a chunk of ginger, and a sprig of tarragon. Let the soup cook and thicken on medium heat, and stir as needed.

While the soup is coming together, boil your lobster tails in salted water for 7-8 minutes, then peel them.

When your soup has thickened to a nice consistency, remove the ginger and tarragon, season with salt and pepper, and add the juice of half of a lemon.

Start by quickly heating a bit of Pernod and white wine to cook off the alcohol. Next, blend this with fresh parsley, tarragon, salt, pepper, and strain it into a bowl. Whisk in a touch of olive oil, and set it aside for later.

This won’t make a lot of sauce, and it’s just meant to be drizzled lightly into the soup. It’s also meant to work with the vichyssoise (and not as a standalone sauce).

When everything is ready, sautÃ© julienned leek in butter and olive oil and season with salt and pepper. Cook this lightly (this will cook very quickly), then make a nest of the leeks in each bowl and carefully pour in your vichyssoise (still hot).

Next, cut your lobster tails and add them to your bowl, then drizzle in a bit of your tarragon, parsley, Pernod sauce, and garnish with chopped chives.

Close
Subscribe to EpicuresTable.com to receive
recipes and updates by email